This young cellist has already soloed with the Boston Symphony, NY and LA philharmonics, Philadelphia Orchestra, and many others. We feature our Horizons Young Artist in a free concert at the Massry Center for all to enjoy.

Cellist Sterling Elliott​ is a 2021 Avery Fisher Career Grant recipient and the winner of the Senior Division of the 2019 National Sphinx Competition. His orchestral appearances in the 2021/2022 season include Haydn Cello Concerto No. 2 with the San Antonio, Richmond, West Virginia symphony orchestras and the Indianapolis Chamber Orchestra; the Popper Hungarian Fantasy with the Orlando Philharmonic and Hawaii Symphony Orchestra, and the Elgar Concerto with the Midland Symphony. He will appear in a Tuesday Matinee recital at Merkin Hall at the Kaufman Music Center, Ashmont Hill Chamber Music Society, and Tuesday Musicale, as well as chamber music at Festival Mozaic and with Shai Wosner and friends for Peoples Symphony Concerts.

During the summer of 2021 Sterling debuted with the Los Angeles Philharmonic at the Hollywood Bowl performing the Tchaikovsky Rococo Variations led by Bramwell Tovey, with further appearances at Chamberfest Cleveland, and Music@Menlo. Previous orchestral engagements have included the Philadelphia Orchestra with Yannick Nezet-Seguin, the New York Philharmonic with Jeffrey Kahane, the Boston Symphony with Thomas Wilkins, the Cleveland Orchestra, Detroit Symphony with Mei Ann Chen, the Dallas Symphony, Virginia Symphony and Buffalo Philharmonic among others.

Sterling has enjoyed a simple and humble musical journey. As the youngest of 3 siblings, he did not want to play the cello but the violin like his older brother and sister. After a bit of encouragement, he completed The Elliott Family String Quartet by learning to play the cello at the age of three under the direction of Suzuki Cello teacher Susan Hines.
He went on to make his concerto debut at the age of 7 by winning the Junior Division of the PYO Concerto Competition, and later the 2014 Richmond Symphony Concerto Competition, the Bay Youth Orchestra Concerto Competition.

Sterling has a long history with the Sphinx Organization where he first received 2nd place in the 2013 National Sphinx Competition Junior Division, then won the 2014 Junior Division. In 2016 he received the Isaac Stern Award by the Sphinx Organization and toured with the Sphinx Virtuosi in 2018 before winning in 2019.
He is a two-time alum of NPR’s From the Top where he was a recipient of a scholarship from The Jack Kent Cooke Foundation and performed several concerts in Switzerland at the 2019 World Economic Forum. He is a Young Strings of America ambassador for SHAR Strings. In 2019, he was the first recipient of The National Arts Club’s Herman and Mary Neuman Music Scholarship Award.

Sterling Elliott is currently a Kovner Fellow at The Juilliard School where he is pursuing his Masters of Music degree studying with Joel Krosnick and Clara Kim. He completed his undergraduate degree in cello performance at Juilliard in May 2021.

Sterling is currently represented for worldwide General Management by Colbert Artists in New York City. He currently performs on a 1741 Gennaro Gagliano cello on loan through the Robert F. Smith Fine String Patron Program, in partnership with the Sphinx Organization.

Praised for his "power, speed and finesse of artists twice his age" (Tribune Star), pianist Elliot Wuu has captured audiences with colorful tones, sensitive musicality and emotional depth in his music. Wuu, a Young Steinway Artist, was named a 2018 Gilmore Young Artist, one of the most prestigious award bestowed every two years to two young pianists up to 22 years old. Wuu is a winner of the Salon de Virtuosi 2021 Career Grant.

Wuu has performed in major venues in the U.S., France, Italy, Germany, United Kingdom, Poland, Romania and China. In NYC, Wuu performed at the United Nations Headquarters in the presence of Secretary-General Ban Ki-moon, at the WQXR Greene Space, and at Carnegie Hall for the Grammy's Salute to Classical Music concert. Other notable concert performances were at the Fondation Louis Vuitton in Paris, Gilmore International Keyboard Festival, Aspen Festival, Ravinia Festival, Hilton Head Bravo Piano Festival and Chopin Foundation of the United States. In 2013, Wuu was selected as one of the twelve young pianists from around the world to participate in the Inaugural Lang Lang Junior Music Camp in Munich, where he performed and worked with Lang Lang in concerts and masterclass. Wuu was also featured on WQXR's Young Artists Showcase and NPR's From the Top radio programs.

In addition to performing, Wuu has worked with legendary artists as Dame Fanny Waterman, Leon Fleisher, Gary Graffman, and Ruth Slenczynska in masterclasses.

Born in September 1999 in Fremont, CA, Wuu began piano studies at the age of six. Throughout high school years, Wuu was a music scholarship student, studying piano with Yoshikazu Nagai, at the San Francisco Conservatory Pre-College, as well as at the Valley Christian High School Conservatory of the Arts. His previous teachers include Jed Galant and Rose Chen. As a proud recipient of a Kovner Fellowship Award at The Juilliard School, Wuu received his Bachelor of Music degree and continue his studies of Master of Music under the tutelage of Robert McDonald. 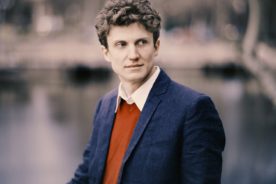