We kick off our anniversary season with a collaboration of one of our favorite pianists with one of our most beloved ensembles. After a thrilling first half, these remarkable artists join forces for Elgar’s classic chamber work.

Tickets will be held at will call.

The Doric String Quartet has firmly established itself as the leading British string quartet of its generation, receiving enthusiastic responses from audiences and critics across the globe.  Selected for representation by YCAT in 2006, the Quartet went on to win several prizes including 1st prize at the 2008 Osaka International Chamber Music Competition in Japan, 2nd prize at the Premio Paolo Borciani International String Quartet Competition in Italy and the Ensemble Prize at the Festspiele Mecklenburg-Vorpommern in Germany.

A recent highlight has seen the Quartet take on John Adams’ “Absolute Jest” for String Quartet and Orchestra with performances at the Vienna Konzerthaus with John Adams conducting, with the Netherlands Radio Philharmonic at the Concertgebouw and with the BBC Scottish Symphony Orchestra conducted by Markus Stenz.  Their recording of the piece with the Royal Scottish National Orchestra and Peter Oundjian will be released on Chandos in 2018.

The 2017/18 season sees the Doric String Quartet featured at the Wigmore Hall as part of the Hall’s Haydn Series. Across five concerts throughout the season the Quartet performs the complete Opus 20 and Opus 64 Quartets and the Seven Last Words.  Elsewhere in the UK they continue their longstanding relationship with the Wiltshire Music Centre and in June 2018 they will take up the Artistic Directorship of the Mendelssohn on Mull Festival.  In Europe highlights include appearances in Avignon, Alès, Zurich, Cologne, Eindhoven and Rotterdam.  The Quartet also takes part in the inaugural Amsterdam String Quartet Biennale as well as appearing at the Malmö Chamber Music Festival and returning to Mecklenburg Vorpommern for the Spring Festival in Rügen.  Further afield the Quartet returns to the US for its annual tour which includes performances in Hawaii, Salt Lake City, Boston, Washington DC and New York.

Formed in 1998 the Doric String Quartet studied on the Paris-based ProQuartet Professional Training Program and later at the Music Academy in Basel.  In 2015 the Quartet was appointed as Teaching Quartet in Association at the Royal Academy of Music in London.

Jonathan Biss is a world-renowned pianist who channels his deep musical curiosity into performances and projects in the concert hall and beyond. In addition to performing with today’s leading orchestras, he continues to expand his reputation as a teacher, musical thinker, and one of the great Beethoven interpreters of our time. Mr. Biss was recently named Co-Artistic Director alongside Mitsuko Uchida at the Marlboro Music Festival, where he has spent thirteen summers. He also leads a massive open online course (MOOC) via Coursera, which has reached more than 150,000 people from nearly every country in the world. He has written extensively about the music he plays, and has authored three e-books, including Beethoven’s Shadow, the first Kindle Single written by a classical musician, published by Rosetta Books in 2011.

Biss represents the third generation in a family of professional musicians that includes his grandmother Raya Garbousova, one of the first well-known female cellists (for whom Samuel Barber composed his Cello Concerto), and his parents, violinist Miriam Fried and violist/violinist Paul Biss. Growing up surrounded by music, Mr. Biss began his piano studies at age six, and his first musical collaborations were with his mother and father. He studied with Evelyne Brancart at Indiana University and with Leon Fleisher at the Curtis Institute of Music, where he is now on faculty and holds the Neubauer Family Chair in Piano Studies. He has since appeared with major orchestras around the world, including in the U.S. with the Los Angeles and New York Philharmonics; the Boston, Chicago, and San Francisco Symphonies; and the Cleveland and Philadelphia Orchestras. In Europe, he has appeared with the BBC Symphony, Royal Concertgebouw Orchestra, London Philharmonic, Staatskapelle Berlin, Staatskapelle Dresden, and Gewandhausorchester Leipzig, among many other ensembles. 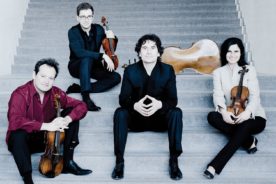 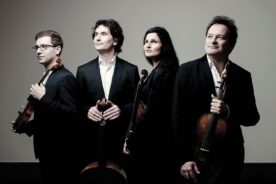 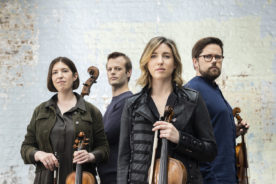